Symptoms of Hypothermia, or Why You Might Strip in the Snow

Home/Weather/Cold/Symptoms of Hypothermia, or Why You Might Strip in the Snow
Previous Next

Symptoms of Hypothermia, or Why You Might Strip in the Snow 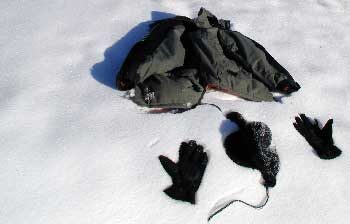 Third of a five-part series about low body temperature.

In part one of this series about low body temperature, I gave a scenario about staying out in the cold a little too long and becoming nauseous.

In the story, the person thinks the problem is an empty stomach. But he’d better watch out. The first symptoms of a low body temperature are often hunger, nausea, and fatigue. Pretty general. And the next thing you know, you’re getting confused.

If you’re mentally impaired by drugs, alcohol, disease, or other reasons, you may not even notice there’s a problem. So if it’s below 50 degrees, or you or someone else has other risk factors for low body temperature, be on the watch for symptoms.

Hypothermia is defined as a body temperature below 95 degrees F or 35 degrees C. At that point it’s called mild. Your body’s still trying to generate heat, and you:

When your body temperature gets under 90 degrees (32 degrees C), you have moderate hypothermia, and you:

Miraculous Recoveries in the Cold

People have been known to survive freezing temperatures even if they’ve stopped breathing for a time. When this happens in conjunction with a cold-water drowning, it’s called the dive reflex. You can read more about that at my general-health website written by health-care professionals, MyFamilyDoctorMag.com.

As you can see, you better recognize the symptoms of low body temperature early. A couple of potential pitfalls when trying to do that:

In my next post, I’ll go over how to treat low body temperature.

Dr. James Hubbard is the best-selling author of five books, including his latest, The Survival Doctor's Complete Handbook. His expertise and down-to-earth style have made him one of the foremost survival medicine experts in the country. Through books; lectures; an online training course; and his popular website, TheSurvivalDoctor.com, Dr. Hubbard shares information about how to deal with medical problems when getting expert care is impossible. His evidence-based tips are a combination of modern medicine, makeshift treatments and Grandma’s home remedies.

Use the information on this site AT YOUR OWN RISK, and read the disclaimer.

New to the Blog?