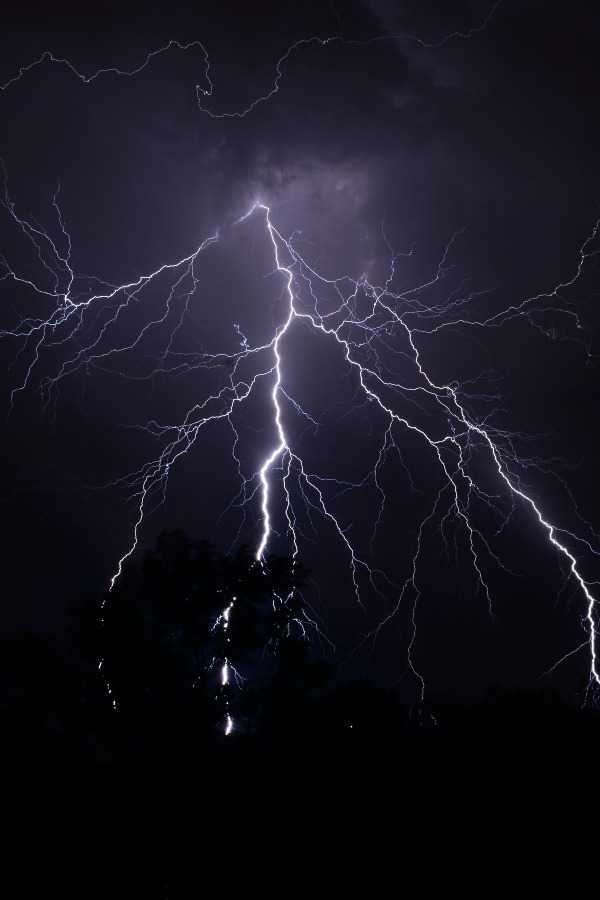 You’re out on a hike or doing yard work, and you hear thunder. No rain yet, not even any lightning seen. What do you do?

In this post I give some lightning safety tips I’ve learned over the years—some I’ll bet you didn’t know. (For example, did you know you can get struck by lightning even if the skies are clear?)

I’ve seen several patients who have been struck by lightning, and all have survived. They usually didn’t have large burns and didn’t remember the flash—just an odd smell that usually began immediately before the strike.

And most people struck by do lightning survive. Each year several hundred get struck across the United States and many thousand worldwide. Only about 10 percent die.

But many survivors develop long-term problems such as loss of short-term memory, trouble thinking or concentrating, dizziness, headaches, irritability, depression, chronic pain, and more. No one person will develop all these problems, but even having one or two can be quite debilitating—especially if they linger, as they tend to do.

How Close Is It?

If you want to know the distance of miles you are from a lightning strike, count the number of seconds between lightning and thunder and divide by 5.

The reasoning is that light travels at 386,000 miles per second, so for all intents and purposes, we see the light instantaneously—as soon as it strikes. Sound, on the other hand, travels much slower—around one-fifth of a mile per second.

“[Seconds between lightning & thunder] ÷ 5 = how far away lightning is”

Now, here are the lightning safety tips I promised.

So What If You’re Caught Outside?

If you’re not sure of the safest place to be when you’re caught outside during a thunderstorm, you’re not alone. The experts don’t know where that is either. In fact, other than inside a car or house, there’s really no safe place.

We do know that you don’t want to be:

Even under a rock ledge or a lean-to shack is not safe.

That only leaves crouching in a thicket of smaller trees, but many have even doubted the value or wisdom of doing that. Some advise just continuing to walk, hoping if you get struck you’ll only have one foot on the ground and that will ease the damage from the strike. Also, if you’re in a group, consider spreading out so if there’s a strike, some of you will likely be unaffected and can tend to the injured.

I know, none of this is reassuring, but they’re the facts.

–
What about you? Have you ever had any close calls?

Dr. James Hubbard is the best-selling author of five books, including his latest, The Survival Doctor's Complete Handbook. His expertise and down-to-earth style have made him one of the foremost survival medicine experts in the country. Through books; lectures; an online training course; and his popular website, TheSurvivalDoctor.com, Dr. Hubbard shares information about how to deal with medical problems when getting expert care is impossible. His evidence-based tips are a combination of modern medicine, makeshift treatments and Grandma’s home remedies.

Use the information on this site AT YOUR OWN RISK, and read the disclaimer.

New to the Blog?